Get to know how KTern.AI manages its Platform release cycles.

The release policy for KTern.AI describes how and when KTern.AI releases are planned. This release strategy is intended to allow customers to benefit from the short innovation cycles of typical cloud deployments, while at the same time providing for long-term stability and investment protection.

The release strategy follows the principle of “one innovation pipeline” – that is, the series of releases coming over time combine to form a continued innovation delivery based on an evolving pipeline.

KTern.AI calls its release cycles - Innovation Cycles as it believes its releases are a bunch of DX innovations to its users. There are six major releases every 12 months. 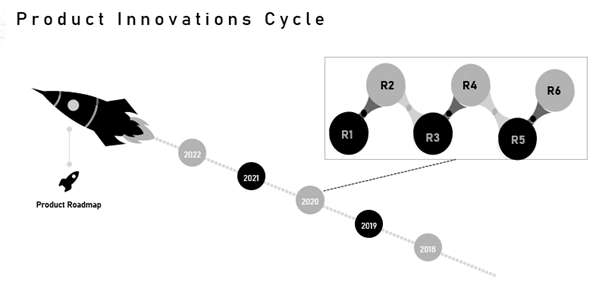 Releases are named after the seasons. KTern.AI follows a bimester release schedule (two months once).

Release versions are named as

There are many factors that influence our product roadmaps and determine the features we implement. When making decisions about what to prioritize and work on, we combine your feedback and suggestions with insights from our support teams, product analytics, research findings, and more. This information, combined with our medium- and long-term product and platform vision, determines what we implement and its priority order.

We're continuously improving and updating our products. To see the latest changes, take a look at the KTern.AI release notes.

KTern.AI intends to publish a public roadmap for KTern.AI products, and our Cloud Platform. This lets you know what’s coming soon and what we’re thinking about for future updates.

KTern.AI encourages the end-users to suggest improvements and new features for its products. The customer can create feature suggestions, or vote, watch, and comment on existing suggestions, at https://support.ktern.com/portal/en/community/using-ktern-ai.

We get a large number of suggestions and feature requests. Your comments and votes on suggestions help us understand what you’re passionate about and how you want our products to support you and your team. The most helpful information you can provide us when commenting on issues is how a particular suggestion would help you. If you describe your use-case to us, and how the suggested change would benefit you and your team, it lets us gain a much deeper understanding of the need behind the suggestion.

Suggestions often have an impact on what we work on, even if we ultimately choose not to implement a suggestion exactly as it’s described. Our ultimate goal is to understand what you and all of our customers need and to create products that meet those needs. Occasionally, that’ll mean implementing a suggestion as described, but it usually means working to understand the need behind the suggestion and how we can meet that need for as many users as possible.

While we endeavor to update and respond to popular suggestions, the volume we receive means there will often be occasions when we can’t provide an update or response. We don’t provide any compensation or credit for feature suggestions that we implement.

Our Product Managers regularly post articles about new features and changes to the KTern.AI Community. You can comment on these posts, ask questions, and discuss with our PMs and other KTern.AI users.

Bugfix release can contain bug fixes and stability and performance improvements. Depending on the nature of the fixes they may introduce minor changes to existing features, but do not include new features or high-risk changes, so can be adopted quickly. We recommend regularly upgrading to the latest bugfix release for your current version. These were previously referred to as 'maintenance' releases by most products.

Go To the Top